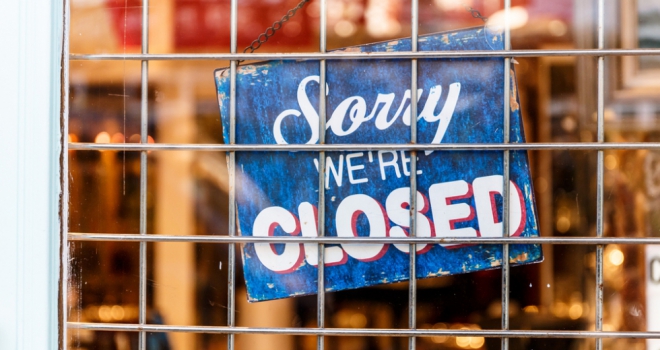 26% of small businesses in the UK would have to immediately close if a key person died or became critically ill, according to research from Legal & General.

L&G's report found that 15% of businesses which had already suffered such an event had shut their doors. The research means that up 1.5 million SMEs could be at risk of immediate closure should the worst happen, while a further 26% of companies in the survey said they would cease trading within a year.

Nearly two-thirds (63%) of the businesses Legal & General surveyed said they had more than one key person and SMEs were aware of the impact their loss could have on the firm’s operations. Across the more than 700 small companies surveyed, losing a key person was ranked as the number one concern. Of those SMEs which had already suffered from such an event, nearly a third (30%) said that a business owner or important employee dying or becoming critically ill had impacted their profits. Almost one in five (19%) said it had lost them the confidence of their customers.

However, though these businesses were aware of the potential effects of losing a key employee, 70% said that they had either never considered, or did not understand the need for business protection. In fact, just under half (48%) of those surveyed said they didn’t have cover in place for any of the key risks of key person, debt or share protection.

Almost two-thirds of small business owners (63%) said they would be happy to be contacted by an adviser about this type of insurance.

Richard Kateley, head of intermediary development at Legal & General, said: “Small and medium businesses are essential to Britain’s economy; they employ millions of people across the UK and make up more than 99% of the private sector. Yet our research shows that many of these companies could be a risk of closing their doors if a key person in their business died or became critically ill – more than a quarter would even have to cease trading immediately.

“SMEs are acutely aware of the risk losing someone important to their business could have, but whilst many companies will insure their computer systems or buildings, they often don’t think about protecting their most important assets – their people. Without the relevant business protection, the impact of losing a key employee or business owner could threaten the ambitions and hard work of SMEs up and down the country.

“There is clearly still a significant lack of awareness about business protection. I firmly believe that financial advisers have a critical role to play changing this situation – nearly three-quarters of SMEs that took out business protection had sought advice beforehand. This shows the vital role intermediaries play in making sure businesses are protected. If they had not sort advice, they may have never considered cover in the first place. At Legal & General, we’re committed to working with intermediaries to ensure businesses, with the right knowledge, are better placed to make informed decisions and protect themselves against life’s unforeseen events.”